Stumpy tried out our All-Terrain Sawhorse and loves that it has a pivot “mechanism that allows each set of legs to rotate several degrees.” He then asks the logical question, “Now, why would you want to rotate your sawhorse legs? Because it makes it fast and easy to level them on uneven ground, providing up to 3 inches of adjustment at any corner with just a quick twist.”

He loves that they also “include many of the other clever features that make Bora Sawhorses so nice. Including legs that fold up in any order and the improved 2×4 slots” that “are set higher than other sawhorses. So, you can have a sacrificial face on top of a sawhorse and still be able to put perpendicular boards to make a bench out of 2 horses.” 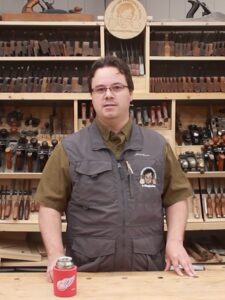 He’s the producer of one of the longest running woodworking channels on YouTube (since 2011), and the editor of Stumpy Nubs Woodworking Journal with over half a million subscribers and nearly a million monthly individual viewers.

In 2017 James received The Woodworking Network’s “40 under 40 Award”, given to innovators in the craft. In 2015 he was thrilled to present alongside Roy Underhill in Kansas City. In 2019 he developed and filmed a table saw course on the set of PBS’ The Woodsmith Shop and over the years he’s written and produced commercials to air during The Highland Woodworker.

STABLZ™ Tap to Adapt™ Technology features a game changing, patented vertical support, triangular in shape, that adapts easily to any surface. A simple tap of the foot pivots the triangle resulting in four points of contact on any terrain. No bending over or tools required — it’s that simple! Simple… but effective.

We have completed all the hard work. Working with engineers and up-and-coming engineering students at Otterbein University in Ohio, we have several designs already prototyped and tested, ready for market. And we can customize new prototypes to fit your company’s exact needs.

If your company’s products are elevated off the ground, STABLZ™ can be engineered to your needs and provide your customer all terrain convenience.