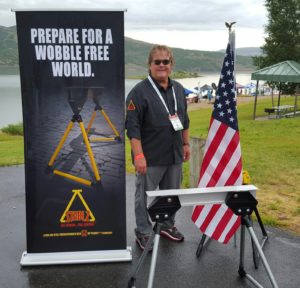 When Gary Hoyle ’79 first heard about The Point at Otterbein, he immediately wanted to know more. As a proud alumnus and avid entrepreneur, Hoyle started thinking about how he could engage with Otterbein in new ways.

As a teenager, Hoyle’s original plan was to play professional baseball. A native of Columbus, after high school he went to Broward College in Fort Lauderdale, a center for professional baseball recruitment. He was drafted by the Boston Red Sox while he was enrolled there.

But when a freak eye injury sidetracked that plan, a phone call from Otterbein Baseball Coach Dick Fishbaugh convinced him to attend Otterbein, where he played baseball and majored in business administration. After a brief stint playing for the Pittsburgh Pirates, Hoyle turned his attention to business.

One conversation with him reveals that Hoyle is a visionary, always processing new business concepts that have led him to help create, launch and grow numerous independent and franchise businesses. Perhaps his best-known venture was Rise & Dine Restaurants, a Columbus-based breakfast and lunch restaurant franchisor, which he led from inception to the first 200 units under development agreements in less than three years. He sold his interest in the company, which now franchises Sunny Street Café restaurants.

Hoyle has facilitated over a dozen business startups and several product rollouts in a variety of industries, including restaurants, manufacturing, green vehicles, sports, entertainment, home services, and consumer products.

Through all of this, he has stayed in touch with Otterbein, most closely through the Athletics Department with student-athletes. When he was introduced to The Point, however, he envisioned a new way to engage with his alma mater and current students.

He began to work extensively with The Point staff and students to develop his latest business, STABLZ™ All Terrain Full Contact™ Products, a multi-industry vertical support that adapts to any terrain with a simple tap of the foot.

“Just do a search for wobbly tables in restaurant reviews online. It’s a problem, and STABLZ™ provides a solution,” Hoyle said.

STABLZ™ All Terrain Full Contact™ Products feature a patented pivoting triangular support that easily adapts to uneven surfaces to stabilize tables, sawhorses, and more. It’s applicable in restaurants, on construction sites, for tailgating and camping — pretty much any situation you can imagine.

“The engineering students at The Point helped with prototyping, testing, tweaking, and designing variations for different uses,” Hoyle said.

“I chose The Point because it’s personal. I could have prototypes made anywhere, but I love being here engaging the students,” Hoyle said. “It’s fun for me when the students think. They have to explore different ways of doing things and use creativity. They still learn, even if their idea doesn’t work.”

“The interaction with the students is a real benefit for them. They are working on something real, not theoretical,” said Curtis Smith, Maker Space and lab operations manager at The Point. “Gary has brought clients to The Point for presentations. Students can see the entire process, companies can see the process, and the students are learning from that.”

Hoyle has been working closely with senior systems engineering major Miles Burnam. “I want to teach students all aspects of the process and give them a taste of real world experiences,” Hoyle said. “Miles has built designs from scratch, but he is also part of the presentations to prospective licensees and gets real feedback from professionals, licensers.”

“At other schools, I would have to wait until sophomore year to start doing engineering. Here I started right away,” Burnam said. “I’ve learned more from this project than just engineering. I’ve learned how to talk business and network.”

“Everything he learns in classes, he can immediately apply to a business, and he works with professional designers,” Hoyle said.

Likewise, members of the MBA Capstone class also got to apply class lessons to Hoyle’s business for their capstone project last summer. “I invested time to work collaboratively with them, and they had some good ideas on how to approach industries,” he said. “They struggled some, challenged each other some. The people in the class were brilliant minds. I made lifelong friends in those students.”

A member of The Point Advisory Board, Hoyle said that he believes in The Point’s mission to promote liberal arts applications to business and industry. “So many liberal arts institutions are fighting capitalism rather than embracing it. Each can benefit from the other.”

Burnam has benefitted from that model, which he says has allowed him to see the world on a bigger scale. “After graduation, I want to start with a job in design and see products I work on go to market. I want to make things and make the world a better place.”

As for Hoyle, he said there is still a place for Burnam in his future business ventures. “I hope Miles will continue working for me at some level. STABLZ™ is a beta. It’s helping create some processes and next steps that will be applied to other industry partners. I have other ideas to bring here.”

But Hoyle isn’t waiting for his idea to be ready for development to engage students. Recently he took a group of engineering students to ThorSport Racing in Sandusky, Ohio. Owned by a friend of Hoyle, ThorSport Racing is the longest-tenured NASCAR Camping World Truck Series team, and NASCAR’s only full-time team based in Ohio.

The students talked to racecar engineers about their work in this fast-paced, competitive industry. “Some learning should happen outside the classroom,” said Hoyle of this unique opportunity.

His passion for unique, hands-on, collaborative learning opportunities makes Hoyle the perfect partner for The Point, and an ideal mentor for Otterbein’s students.

To learn more about The Point at Otterbein, visit www.otterbeinpoint.com.